Any way you slice it, defining ‘running‘ is the perfect antithesis to me. I am 6’4″ and ALL of 250 lbs, but thought 2016 would be a great year to: 1. Get in shape, and 2. Try out this runDisney phenomenon. My family are all runners, and the kids have both been competitive at cross country…so I’ve always wanted to join in on their misery…sorry, “joy”.

Full disclosure: I’ve played sports my whole life…so I’m not opposed to short bursts of running for a reason , but never was a fan of ‘jogging’ (I think it’s pronounced ‘yogging’ with a soft ‘j’). Being an avid Disney fan, I’m always looking for my next new experience…runDisney was always on my radar.

First up was the Disney Princess Half-Marathon Weekend (Feb.). I’ve run a few 5K’s, so this was a distance that wasn’t too intimidating (even though the feminine title was). Getting up early was a different story…here’s how the math plays out:

Turning to the Dark Side Challenge

When Disney announced the Star Wars runDisney events (Light Side in Disneyland, Dark Side at WDW), the little fanboy in me did something totally insane: I signed up for my first runDisney ‘Challenge’. A ‘Challenge’ is generally defined by Disney as 2-5 runs with special medals for each completion. For the Dark Side Challenge (April), the runs consisted of 10K and 1/2 marathon (Sat., Sun.). Keep in mind, I had never run more than a 5K and I was attempting successive runs of 10K  and 1/2 marathons! I was dealing with an injury on top of it all…but somehow I pulled it off!

For the inaugural 10K Star Wars run at WDW, I decided to cosplay. I was Boba Fett’s Waterboy (crossover from the Adam Sandler character). I even went as far as having a legit water back-pack with not one but two paper cup dispensers (I was proud of this costume). 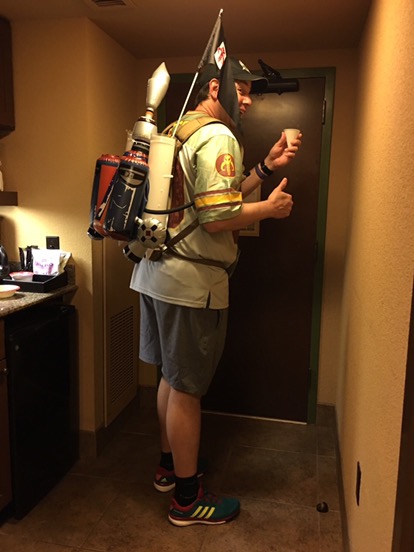 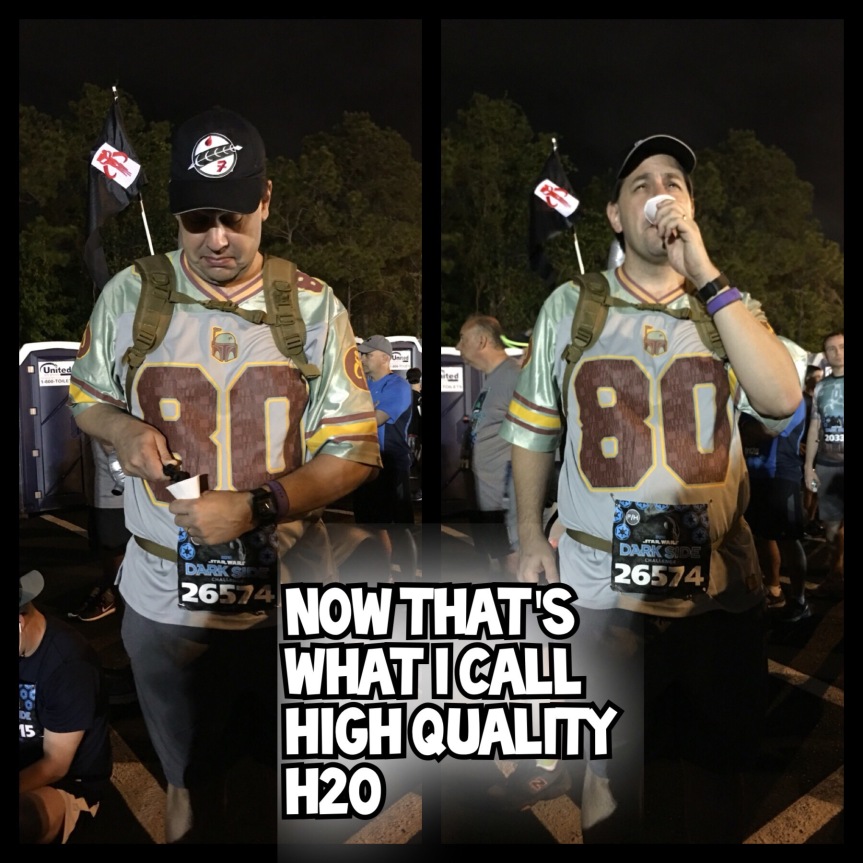 Sure, it was an amazing experience…one might even say “Once in a lifetime”, because I don’t ever plan to do another challenge again! I ended up losing 3 toenails, had swollen knees for a week, and had to get a steroid shot in my foot when it was all over. They can take my toenails…but they can’t take my memories.

Superheroes are Superest at Disneyland

Finally, I was told by many runDisney enthusiasts that the coup de grâce of runDisney is at Disneyland…so that’s where we went for the Superheroes Weekend (Nov.). Word of caution: to be able to fully enjoy the advantages of running at Disneyland, it is to stay onsite and preferably at the Disneyland Hotel which is NOT cheap. The Disneyland Hotel not only hosts the Runners Expo (where you have to go for your bib, shirt, etc.), but also is about 300 yards from the start and finish of the races! Remember the times I quoted earlier from a typical WDW race…well, we strolled out of our hotel to walk over at 5:00 am for our 5:30 am race.  Plus, we were still on central time which felt like 7:00 am…not bad at all.

The Disneyland runDisney event was everything positive we had heard and more. For the 10K we ran through both parks and Downtown Disney and it was full of amazing sights and sounds throughout. We had a later corral, so we weren’t able to do any meets with characters…but that’s OK, I’m not even a big Marvel fan…just running through these pinnacles of Disney theme park master work was reward enough.

I have a tempered expectation with runDisney now. On one hand, it’s an exclusive Disney experience offering a rare glimpse inside the empty parks with often rare and exciting characters. On the other hand, they are VERY expensive, often held on off-peak times as a scheduling stop-gap (conflicting with school schedules), are mostly SUPER early morning events (not a morning person). The biggest complaint coming from a Disney theme park geek, the runs cut into my theme park touring energy budget. All this being true, we will eventually do another event…there’s a good chance it will be Disneyland, but don’t count out another Star Wars run from a Star Wars geek 😉