Eight (soon to be nine) men scattered throughout the county who previously never met in person came together almost a year ago to form The Mickey Dudes podcast. Each of us was a Disney fan who extensively tweeted about the company’s material. 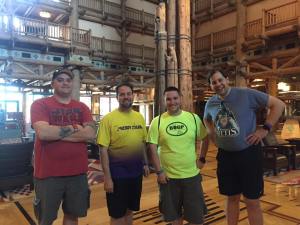 On August 8th of last year each of us, along with a few others, were messaged on Twitter by an individual who has a reputation of bringing together quite a few podcast within our fan community. This individual asked us to form a podcast that involved guys talking about Disney.

I personally wanted to be on a podcast for a very long time…however, being burnt before on a previous Disney podcast endeavor I did not put much stock into this invitation. Having already experienced such a disappointment, I did not want to be let down in the event that such a project would not get off the ground . Adding to that, the premise for the show has been done over and over again in our fan community.

To my surprise many guys in the group chat were just as eager as me to work on such a project. Quite a few also promptly declined the invitation and left the discussion. Those who remained with the exception of a select few became The Mickey Dudes. We moved the discussion to a group Facebook chat and friendships were born.

None of us had ever met before, but we found ourselves talking every day. We decided that we would take the autumn months to learn the ins and outs of podcasting and plan out our show. Our goal was to record our first show in January: a goal we which we succeeded. We hit a few hiccups along the way. First, we needed to find a name. This was by far the hardest part of creating the show. Variations of anything that we brainstormed already existed either as a blog or a podcast of a similar name. The Mickey Dudes name was not our first choice. I personally thought the word dude was dated and had no more relevance in today’s pop culture.  The name did however have one thing going for it: It was available! In the end, we narrowed the name choices down to two. We decided to let Pat’s son pick the name from the two choices he was given and liked us becoming The Mickey Dudes. Aside from that issue, association with our facilitator (the guy who originally tweeted us) was severed due to creative differences of the direction we wanted to take the show. Today The Mickey Dudes runs as a well-oiled machine.  Sure, Chuck is always wrong, Tim has a short fuse, and Pat is a propaganda drone of the guys at the WDW Main Street Podcast, but every family needs some wackos in it. Truth be told, I kid because I love. Oddly enough these men have become amazing friends despite the fact that I have yet to meet some of them in person. I sometimes sit back and marvel at the product we put out and find myself overcome with a feeling of gratitude for the opportunity to be a part of this group. The Mickey Dudes Podcast is my hobby. It’s my diversion from the stressors in my life. This project has done more for me than I will ever be able to do for it. It is truly an honor and a pleasure to call myself a Mickey Dude and to work with such a league extraordinary gentlemen.